How to Tell the Age of Ginseng Plant

Estimating the age of an individual ginseng plant may be done by carefully counting the number of scars present on the rhizome or neck of the plant. The neck is located at the top of the swollen portion of the root and is where the shoot originates (Figure 1). At the end of a growing season, the aboveground shoot will die-back and leave a scar on the neck. These scars provide a minimum age for a plant since a plant can remain dormant during a given year and thus not produce a top and scar, or necks can be damaged leading to "missing" years. Some scars may also be obscured by abnormal growth.

Photo of the root neck of a ginseng plant: 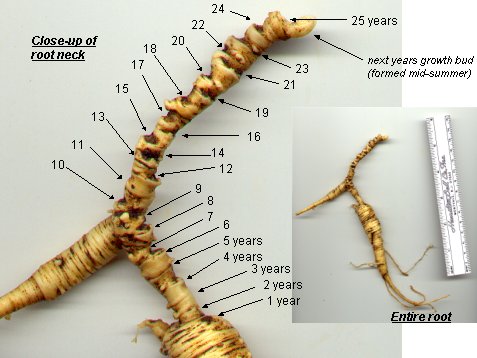 An important consideration for collectors and growers is that a minimum age export requirement is being enforced within the industry by the US Fish and Wildlife Service (USFW) through inspection of root "necks." Specifically, the annual growth scars on root necks are counted and used to verify that the plants are at least five years old; anything less than five years of age (i.e., not having at least four scars on the neck) is not legal for export from the United States. This replaces a 10-year minimum export restriction that was enforced during the 2005 season.

In the process of legal exportation, root necks are randomly inspected at State Forest District Offices and by the United States Department of Agriculture (USDA) Animal and Plant Health Inspection Service (APHIS) before shipments are approved for export from Pennsylvania and the U.S., respectively. The minimum age requirement does not prohibit the harvesting and selling of root from plants younger than 5 years of age within the United States.

It should be noted that necks are also used by buyers to assess the value of the harvested roots: older plants are generally considered to be more valuable than younger ones. Thus, there are both legal and economic incentives for collectors and growers to carefully handle roots during all stages of harvest and curing to ensure that necks do not break off.

Ginseng can grow to a ripe old age. Some of the oldest plants found these days range between 50-130 years. It is likely that collection tends to lower the average maximum age that plants attain in the wild so that younger plants predominate and older plants are uncommon.

We have 244 guests and no members online