The First Year of Life for a Ginseng Plant

American ginseng seeds are usually planted in the fall and they attempt to germinate the following spring. I use the word, "attempt" because ginseng seems to suffer from poor germination rates. In my first few years, only about 30% of the seed came up the following spring. In one of those early years I experienced only a 6-7% germination rate, but many of the seeds came up eventually in subsequent growing seasons.

Suffice it to say, ginseng comes up when it is ready to come up. When it does, it shoots up a tiny slender stalk about an inch high. At the top are three leaflets that resemble a wild strawberry, except the leaflets are pointed at the end, and toothed all around instead of just at the tips. 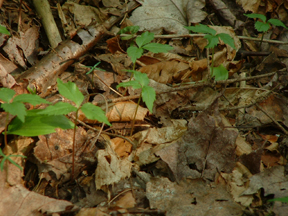 After this sudden growth which takes place in just a few days, everything stops, and there the plant sits for the remainder of the season. 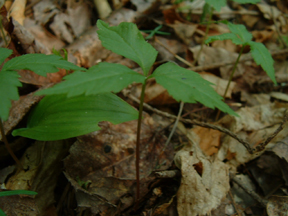 Actually, the leaf and root does fill out a bit more during the summer, but not much. These three photos show the growth sequence from emergence in spring to the end of summer. I have dug ginseng after it had completed its first year of growth and found a root about the same volume as a pea, weighing about 0.2 gram. The leaflets will usually measure about an inch in length, the same as the stem height. First year ginseng has a dark green color. The stem can have a reddish or purple tinge.

If the ginseng seed is allowed to dry out after it is planted, the seed will die. If the seed has germinated and it is in an area that becomes saturated with water, it will die. It likes a deep, loose, black woods soil. Hardwoods. Ginseng will often germinate if planted in soil covered with spruce or fir needles, but it does not thrive and often will die after a few years. Ginseng will grow in rocky soils, but it does so more slowly. First year ginseng is fairly tolerant of drought, but it does need some moisture. In even the driest New England summers, in shady hardwood forests, there will be enough moisture to keep ginseng going.

Ginseng seems to like growing with other woodland plants such as ferns, jack-in-the-pulpit, solomons seal, trout lilly, foam flowers, and wolf bane. It tends not to like grasses, but this may be more an indication of the amount of sunlight reaching the ground rather than some inherent quality of the grass itself. When I plant seeds, germination always seems to be better when I plant in areas where there is lots of plant growth rather than bare dead leaves.

The seedlings do seem to be susceptible to wilt. In my first experiences with ginseng I remember watching plants die one-by-one until entire plantings were gone because of wilt. Wilt does not seem to be the problem now that it was, and I'm not sure why.

One thing I noticed as the ginseng established itself was that it seemed to have a very tenuous hold on life at the beginning. Germination was poor, and there were equally heavy losses from year to year. I adopted the practice of mass planting in hopes that more would survive than die off over time. Then at some point, the ginseng seemed to reach a critical mass. Now germination is better and year-to-year survival is much higher. Is it possible that the community of ginseng conveys a strength to its individuals? Can it be that survivability of a dozen individuals is greater when there are 1000 or 10000 other individuals growing nearby? It sure seems that way.

We have 117 guests and no members online